David was born in Mayaguez, Puerto Rico and moved to the United States at age 5. Since moving from the island, he has lived in 9 different states. David holds a B.S. in Journalism (Kent State University, 1994) and M.Ed. in Work, Community and Family Education (University of Minnesota, 2001).

Andrew
Chief Operations Officer
Andrew is a first generation Italian immigrant, born in Venice. He is married to a second generation Colombian American, and father of the most incredible triplets. Andrew uses his business management experience to contribute to the empowering of the Latino community.

Evelyn has 12 years of experience working in the Mental Health field providing social services. She has worked to improve the lives of underserved Latinx people, especially women, affected by immigration on both sides of the Mexican-American border. Evelyn was born in Guanajuato Mexico and moved to the US in 2013. Before moving to Eugene she lived in Athens Ohio where she earned her master’s degree in political science and a graduate certificate in women's gender and sexuality studies from Ohio University. She also holds a bachelor’s degree in social psychology and completed all coursework to earn a master's degree also in social psychology from the Universidad Autónoma de Querétaro. Evelyn has nurtured a passion working in nonprofit agencies because she is convinced community organizing is key to affect social change. When Evelyn is not working she loves spending weekends hiking in the National Forest.

Basilio was born in Puerto Vallarta, Jalisco, Mexico. His career at Centro started in 1997. Basilio holds a GED from the University of Oregon's High School Equivalency Program (1987) as well as a CADC-II.

Juanita
Alcohol & Addictions Counselor / Problem Gambling Counseling
Juanita was born in Texas. She is fourth generation Mexican-American. As a child, she traveled with her family to Oregon, where her parents found employment in agriculture. She settled in Oregon, and formed her own family. Juanita has more than 30 years of experience as case worker, counselor, and advocate. She said: “I am a strong believer in social justice, the pursue of happiness, equal opportunity, and respectful treatment for all the individuals who seek our services. I am honored to serve the community.”

Lisbet
Alcohol & Addictions Counselor
Lisbet grew up in Corvallis Oregon and holds a B.S. in Family and Human Services from the University of Oregon (2012). When moving to Eugene she was happy to find an organization that provided services for the Latino community. She believes everyone has the potential to do great things when given equal opportunities. She finds working with the Latino community extremely rewarding and is here to lend a helping hand to anyone who needs one.

Oscar was born in Guanajuato, Mexico and was raised in Hood River, Oregon. He attended Lane Community College and is pursuing a major in Psychology and minor in Spanish at the University of Oregon. He plans to graduate in 2019 and work in the alcohol and addictions field. When he is not working he enjoys exercising and spending time outdoors. "I am passionate about personal development and I love helping others become the best person they can be."

Monica was born in Vina del Mar, Chile and moved to the United States in 2003 with her husband Patrick. She has lived in Seattle, Washington for 7 years; then moved to Sioux City, Iowa where she lived for 8 years. In 2017, she returned to the Pacific Northwest with her family. She holds a B.A. in Psychology Counseling (Morningside College, 2012) and a Master’s degree in Social Work (Boston University, 2016). She has practiced as Substance Abuse Counselor and holds a CADC and a LMSW for the state of Iowa. She was also part of the crisis intervention team that provided support to first responders after critical incidents happening in the area.

Celeste was born in El Salvador and grew up in Guatemala. She came to the united Stated in 2013. Celeste got her Bachelor's degree in Psychology at the University of Oregon in 2016. She is currently a graduate student in the Masters of Couples and Family Therapy at the University of Oregon. She works at the Stress Neurobiology and Prevention Research Lab more in depth with the FIND project, which focus on enhancing parent-child interactions. Celeste is currently an intern at HEDCO, where she works with families, couples, and individuals from different backgrounds and ages.

Jake Ferrer is originally from Brookings Oregon, where he lived for 18 years. Jake graduated  from Brookings Harbor High School in 2012, he then moved to Coos Bay where he started his academic career. He earned his Bachelors degree in Applied Psychology at Oregon Institute of Technology in 2016. Jake worked as a family mentor and he worked with youth in residential facilities before moving to Eugene in 2017 to study social work. Jake graduated in 2019 with a Masters degree in Social Work. In his free time Jake likes to read, play music and go mountain biking .

He recently joined our Centro family and he is excited on this new adventure. Jake is very passionate about working with our Latinx community and supporting their empowerment.

Ana was born in El Salvador. Her parents migrated to the United States in 1996. She has lived in Oregon all her life. Ana started to work at Centro Latino Americano in 2017 as a Receptionist; after a year, she transitioned to Social Services, specifically Case Management. She is certified as a Peer Support Specialist (PSS) and Community Health Worker (CSW). Ana enjoys outdoors like camping, hiking, fishing, gardening, biking and listening to music. She loves to be with her husband and children who are her motivation and support.

Francisca is first generation Mexican-American; her parents migrated to the U.S. in the 1980’s. Francisca was born and raised in South Central, Los Angeles and moved to Oregon during her high school years. She has multiple years of experience in customer service and she is the first line of contact at Centro Latino and her charismatic personality will make you feel safe and welcomed. Francisca enjoys going camping, swimming, sports events and spending time with her husband and three boys. She also enjoys spending time with her dog Luna.

Julia is a first generation Mexican-American; her parents and two older siblings migrated from Guanajuato, México to the US in the 80s. Julia was born and raised in Los Angeles, CA and she earned a certification in the Medical field there. She moved to Eugene Oregon in 2011 and fell in love with Oregon. She has been working in the community health field and volunteering in different non profit organizations in different communities for many years. Julia is the founder of Xicanasymas (Las Mujeres) a group of women with the mission to support women's empowerment and to educate women about healing practices in a positive environment. Julia loves working and serving the community.

Karla is originally from Cartago, Costa Rica and moved to the United States in 2000. She became a U.S. citizen in March 2016 completed a M.A. in International Studies at the University of Oregon.

Katharine
Case Manager
Katharine has lived in Eugene since 2003. She is from California and holds a BA in political science from UCLA and a masters in public policy from UC Berkeley. She has experience in local government, the nonprofit sector, and community engagement and advocacy. Katharine started learning Spanish in school and through living in Mexico, Chile and Spain. She believes the entire community benefits when all community members are treated with respect and have access to opportunity. She is honored to work in service to the Latino community of Lane County.

María Paz is originally from Chile, where she earned her Bachelors degree in Art and Design. She moved to the US in 2013, with her husband and son Lucas, in 2015 they moved to Eugene Oregon. Here she got certified as a Positive Psychology coach, and founded LUNA Community, an organization named after her daughter ( born in 2017 ), that supports and empowers women in our area.

María Paz is very passionate about connecting and serving people in our community.

Ruth Ferrer is a graduate student at Pacific University, earning her Master's degree in Social Work in Eugene OR. She was previously an intern for Centro but was offered a caseworker position to help during this COVID-19 pandemic. Ruth has a passion to work with the Latinx community. As a first-generation born to Mexican immigrants, she is committed to being of service for the Hispanic population. Ruth desires to work as a medical social worker after earning her master's degree. There is a need for Latinx people in hospitals across Oregon. She enjoys working at Centro Latino Americano because she is involved in working with a diverse Latinx community, practices her social work values and ethics, and has the opportunity to do what she loves most: to help others.

Estela is a UO College of Education graduate. She is a passionate youth and family advocate, working to connect youth to resources and opportunities that will help them thrive.

Hours: DUE TO OUR CURRENT COVID-19 SITUATION OUR DOORS ARE CLOSED, BUT WE ARE STILL WORKING, PLEASE CALL US MONDAY-THURSDAY 9am-12pm and 1pm-4.30pm FRIDAY 9am-12pm 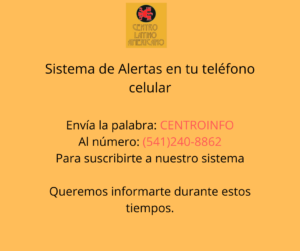 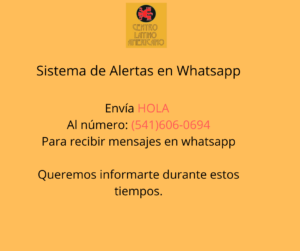